Punk Science: Inside the Mind of God 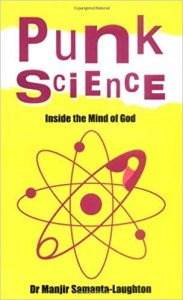 “Punk Science” demonstrates that ideas from the cutting-edge of science actually explain phenomena that have previously been thought of as “paranormal”. Inspired by the “Gnostic Gospels” and the history of the sacred feminine, Dr Samanta-Laughton offers a new model of the universe, where consciousness generates life, where black holes exist inside our bodies as well as far out in space, and where the same science explains galaxies and planets as well as human evolution, auras and chakras. Drawing on the very latest in scientific understanding, the Black Hole principle outlined by Dr Samanta-Laughton represents the next leap forward in both human understanding and living, and gives a closer approximation to scientific reality than the macho-approach of the old-style physics.